Iceland Drilling have mobilized their High-Tec drilling rig Bentec ER-350 to Hellisheidi area in Iceland and started drilling new additional geothermal wells for the company ON Power (ON).

The contract which was signed in end of May this year involves the drilling of a total 7 firm wells and 3 optional wells. The average estimated depth of each well is from 2,500 to 3,000 metres.

The rig is using “green” electric power from Grid

Today’s drilling technology require lot of power which usually have been provided by using large amount of diesel to feed the multiple power generators sets. The developer, ON Power (ON) emphasized from the beginning to preserve the nature and use alternative approach powering the drilling rig. Instead of burning diesel, then environmental friendly electricity from the grid is being provided to mobile transformers skids, to power the rig equipment.  This saves huge amount of diesel providing direct economic benefit, not to mention large amount of CO2 emissions is prevented, or around 600 metric tons of CO2 per well.

The rig used in the above-mentioned project, has a lifting capacity up to 350 metric tons. Directional drilling technique will be applied in this project which is both economic and environmentally preferred. The expected heat at 2,500-meter depth, will be between 250 – 350 °C

The first drilling location is in Hverahlíd which is about 6 km away from current geothermal power plant in Hellisheidi. Other drilling will take place in Hellisheidi and Nesjavellir. This phase of the drilling project is estimated to be completed 4Q of next year 2018.

The exploitation of geothermal steam in Hellisheidi is not only used to produce electric power, but is also a large provider of hot water to the district heating distribution network in Reykjavik. 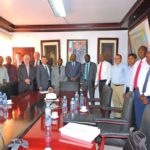