Following mobilization and rig up of our Drillmec HH-220 rig in the Azores, then geothermal drilling operations have started. First well is already finalized successfully and the second already in progress. The geothermal area is in Ribeira Grande on the island of Sao Miguel.

Iceland Drilling Company have successfully mobilized their drilling rig which is Drillmec HH-220 from the Island of St. Vincent in the Caribbean to the Azores Islands.  Following land transport and rig up procedures, then geothermal drilling operations have started. First well already finalized successfully and the second already in progress.  The geothermal area is in Ribeira Grande on the island of Sao Miguel.

The project involves the drilling of three to six geothermal wells in Ribeira Grande up to a depth of 1500 meters.  Once finalized the drilling rig will be mobilized to the nearby island of Terceira for additional drilling of two to three wells at Pico Alto geothermal field.  The purpose of the drilling is to increase the electric generation capacity at existing power plants.

Sigurdur Sigurdsson, the CEO of IDC, underscored that this drilling project marks the 5th geothermal drilling project operated by Iceland Drilling Company on the islands of the Azores.  We are very glad to have contributed toward activation of geothermal power generation in the Azores.  We are islander just like Azores and realize the importance of utilizing domestic clean energy source for energy security. We look forward to the good cooperation and to continue to create value for our client in Azores.

According to Carlos Bicudo, Board Member of EDA Renováveis

The exploitation of geothermal resources in the Azores guarantees 25% of all electricity generation on the islands. The contribution of geothermal is even higher in each power generation system, reaching up to 44% in São Miguel island and 12% in the Terceira island. With about four decades of exploitation in the Azores, geothermal has proven to be a cost-effective option, providing reliable and sustainable power, and reducing the carbon footprint of power generation.

We are planning to increase the geothermal capacity in São Miguel and Terceira Island, passing from the current 23 to 28 MW and from 3,5 to 10 MW, respectively. The ongoing drilling campaign corresponds to first phase of this ambitious investment plan. We are very glad to have the cooperation of Iceland Drilling Company for this project as drilling contractor, who already drilled most of our wells, and we look forward to working together once again. 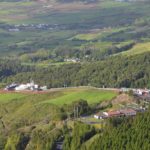 Iceland Drilling Company has secured a drilling contract to drill 9 wells for expansion of geothermal capacity on the Azores, Portugal.

We use third-party tools and services that utilize cookies. These tools help us deliver a better website browsing experience. Click on the “Accept” button or continue to view our site to consent the use of cookies on our site. Find out more.