Iceland Drilling Company has secured a drilling contract to drill 9 wells for expansion of geothermal capacity on the Azores, Portugal.

EDA Renováveis have awarded Iceland Drilling Company (IDC) a new drilling contract on the Azores, for drilling geothermal wells on the islands of Sao Miguel and Terceira. This is the result following an open tender in the European Area, where the company participated in competition with two other European drilling companies. The project involves drilling for nine (9) geothermal wells, with an estimated depth of 1,000 to 2,300 meters. The value of the contract is about EUR 18,6 million.

Ahead is further preparation for the project on the Azor Islands. IDC plans to mobilize the drilling rig „Odin“ in the springtime from the island of St. Vincent in the Caribbean, where the company is completing drilling three geothermal wells. The spud in is expected to begin on the Azor Islands this early autumn, first on the island of Sao Miguel, where there are currently two power plants utilizing the geothermal wells drilled by IDC some 8-15 years ago. Then the plan is to mobilize the rig to the island of Terceira, but there is already one geothermal power plant producing up to 3 MWe.  The working time is estimated to be 12-18 months.

According to Sigurdur Sigurdsson, CEO of IDC, this agreement is important for the company, as drilling activity in Iceland will be minimum for the next two years.  IDC previous experience of contracting in the Azores and beyond is a good roadmap for this project, but over the past 15 years the company has done a lot of work in acquiring projects abroad and now the company has drilled geothermal wells in a total of 10 countries around the world. The company is respected in the international market for its expertise it has acquired in Iceland and abroad. Interest in the utilization of geothermal energy for energy generation and central heating is growing in many parts of the world, where it is environmentally friendly and renewable energy.

Meet us at GeoTherm in March 2020 in Offenburg 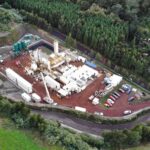