From the signing ceremony, left Gunnlaugur Sigurdsson from Iceland Drilling NZ and to the right Russel Shaw CEO Top Energy.

Ngawha Generation Limited and Iceland Drilling NZ have started collaboration on a new drilling project in Ngawha, New Zealand, and an agreement to that effect was signed on the 21st of December 2017 at Top Energy Ltd offices in Kerikeri.

Top Energy owns the Ngawha geothermal power station, which has been operated since 1998.  Ngawha power station which is located 54 km north east of Whangarei currently has the capacity of producing 25 MWe or 70% of all electricity consumed in the Northland area.

According to Sigurdur Sigurdsson CEO of Iceland Drilling Company (IDC). We are pleased to sign this contract and are looking forward to using our geothermal expertise together with our client.  This is IDC’s seventh drilling contract in New Zealand. 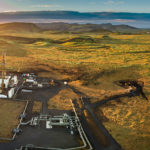 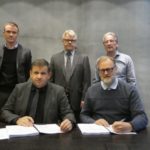 We use third-party tools and services that utilize cookies. These tools help us deliver a better website browsing experience. Click on the “Accept” button or continue to view our site to consent the use of cookies on our site. Find out more.